How Jacinto quit the Champs-Elysées for the Douro 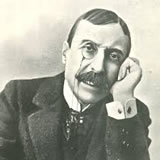 The Portuguese writer Eça de Queiroz (pictured) was one of the nineteenth century’s greatest novelists. His satirical novel The City and the Mountains, the second part of which takes place in the Douro, will appeal to contemporary readers seeking fulfilment far from their cities.

Rereading recently Margaret Jull Costa’s excellent translation of Eça de Queiroz’s satirical novel The City and the Mountains, I found the account of Jacinto’s transformation from Paris sophisticate to Douro gentleman farmer just as enchanting as on my first reading.

Often considered Portugal’s most important 19th century novelist, Eça de Queiroz is frequently compared to Dickens and Balzac, and even to Tolstoy. Writing realistic and penetrating satires of the conservative society of his day, Eça de Queiroz was committed to social reform and a leading member of the ‘Generation of 1870’, a progressive intellectual movement which contested the established political and cultural order.

Alongside his career as a writer, Eça de Queiroz had a second career as a diplomat in the Portuguese consular service, serving for nearly 15 years in England, in Newcastle and Bristol. He does not seem to have enjoyed this long stay in England much, possibly regretting the blue skies of his native Portugal, and commenting on the “indecent (English) manner of cooking vegetables.”

The City and the Mountains, Eça de Queiroz’s last novel, was published in 1901, the year after his death.

The novel’s hero, Jacinto, lives in a huge town house on the Champs-Elysées. Immensely rich, he is an obsessive collector of every tech luxury that money can possibly buy. A victim to the emptiness of fashionable life and to his addiction to modernity, Jacinto gradually sinks into a decadent and dissatisfied condition. His fall is described by Eça de Queiroz with a delicious blend of satire and irony.

A fortuitous letter from Jacinto’s estate manager unexpectedly arrives, summoning him back to the family property in the Douro, a vast domain he has never visited. An ancestor’s bones are to be transferred to a recently renovated chapel and the estate manager enquires whether Jacinto would like to attend the ceremony.

Accompanied by his best friend, the narrator, Jacinto sets off for distant and very rural Portugal.

On his arrival everything appears not only alarmingly unsophisticated but positively shambolic. Soon though, Jacinto begins to be charmed by the warmth and sincerity of the people on the estate and moved by the grandeur of the beautiful countryside. As a new sense of purpose and humanity begin to enter his life, Jacinto starts creating positive and fulfilling routines for himself and organizing life-enhancing projects for the local community.

Besides being amused by Eça de Queiroz’s account of these two contrasting fin-de-siècle societies, I think many contemporary readers will find inspiration in Jacinto’s journey. He sheds to discover more.

Today, the Douro remains just as beautiful and its people still have the same empathy. Like Jacinto, we are overwhelmed on a first visit to the Douro by so much simplicity and beauty. Perhaps Eça de Queiroz was a visionary as well as a satirist?