Woman found stabbed to death in her home in Portimão

False firefighters ask for donations from motorists in the Algarve

Measures to take effect during the renewal of the state of emergency, beginning 24th November

Covid-19: Pfizer and BioNTech submit application for vaccine approval in the US

Brexit: Update on S1 holders in receipt of exportable benefits

Covid-19: First to be vaccinated will be known in December

Socialist Party MP Miguel Freitas has questioned the government about the demolition of property in the Ria Formosa islands of the Algarve and about the relocation of displaced home owners in the Polis programme to clear the islands of buildings.

The MP pointed out that there seems to be a process in place where the poor are being moved on with little or no provision for their housing needs by Faro and Olhão councils.

Noting some examples of the state turning a deaf ear to the complaints of islanders who have nowhere else to go, Freitas has raised his questions conveneintly late in the day to do any good as Polis officials spent today walking the length of Faro Island with police protection sticking demolition notices on selected buildings.

Freitas referred to "two situations that will culminate in the demolition of homes in the coming days, with no place for relocation," but there are dozens more where the glee of Polis at getting the islands cleared has overcome and social conscience as to the needs of those it forcibly is uprooting.

In the case of the demolition process on Faro Island, the MP stated that Faro council decided unanimously to notify Polis that until Faro had implemented a development plan to assist those that were being relocated, Polis could not proceed with its demolition programme as it would be illegal so to do.

This was ignored by Polis which has the full backing on the real villain of the piece, the Minister for the Environment who is "deemed to have the necessary legal certainty to start the administrative process to possess the houses."

Who has ‘deemed’ this is not clear but the minister is happy to ignore local concerns and local provision for re-housing and has taken delight in attending the first of 800 demolitions for a photo opportunity that showed not his efficiency at work, this process is ten years overdue, but the uncaring nature of the state machine that follows the letter of the law when it suits and callously ignores those whose democratic remit enables lawmakers to operate - the very public that is being treated in an uneven and unfair manner.

One rather cruel ruse according to today's Olhao Livre blog  has been to remove roofs of island houses 'for safety' as they are made of asbestos sheeting. This has left many people still theoretically housed but in reality freezing cold while waiting to hear news of their resettlement which for many will never come.

The Polis Litoral Ria Formosa programme covers over 48 kilometers of waterfront and 57 miles of lagoon front between the municipalities of Loulé and Vila Real de Santo António, covering the protected area of the Natural Park of Ria Formosa and skillfully ignoring large waterside developments in Fuseta, many multi-million euro properties in Quinta do Lago and at other prime waterside locations. 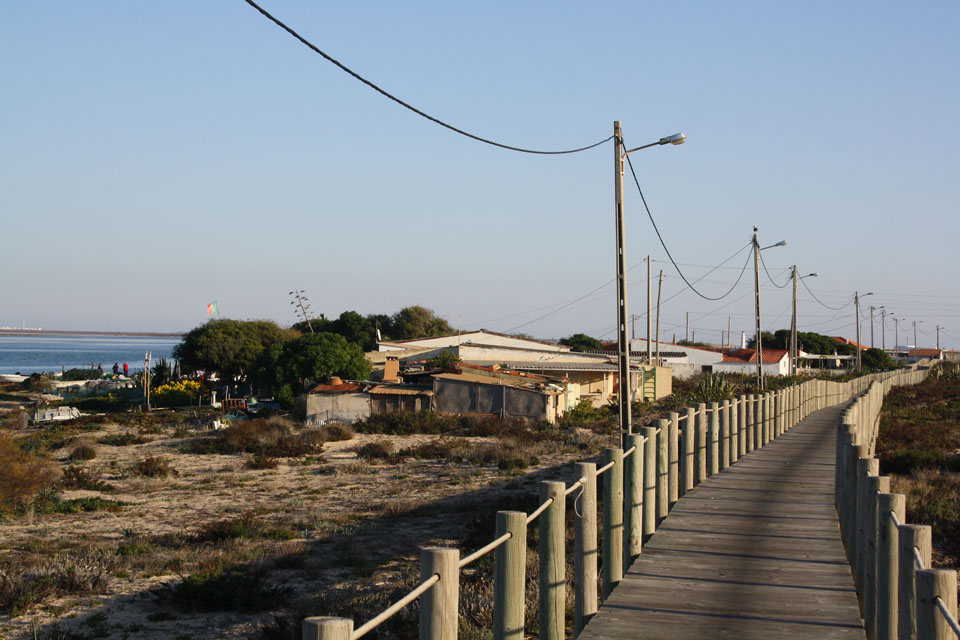 -6 #1 Brenda 2015-01-09 13:20
this process is ten years overdue, but the uncaring nature of the state machine that follows the letter of the law when it suits and callously ignores those whose democratic remit enables lawmakers to operate - the very public that is being treated in an uneven and unfair manner.....

as commented elsewhere - a damning indictment on Portugal's backwardness.

A process that is itself 10 years late. So how many of the elite started building since then - confident that following a well aimed bung - they would be amongst the lucky ones to be allowed to remain ? And being now amongst the few with a view ... their properties now much more valuable. So repeat bungs can be covered by the increased value.

If this was marked as Africa on the map we would tut tut and say rather unfortunate... but it is not. Apparently, according to the map, this is actually happening in Europe. Today !
Refresh comments list